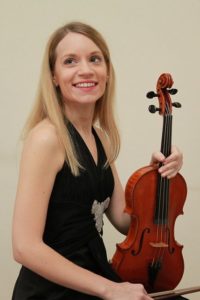 Dr Fiona Gibbs is a musician and academic. She has been involved with Archives for London since 2013 giving seminars on her research, which examined the cultural importance of the Royal Albert Hall, and performing at the annual AfL Summer Soiree. At the Summer Soiree she is often joined by her brothers, Mark and Iain Gibbs and her partner Mark Walkem. The ensemble perform a wide range of music for events: from Mozart quartets through to well known pop songs by artists such as the Beatles and Ed Sheeran. 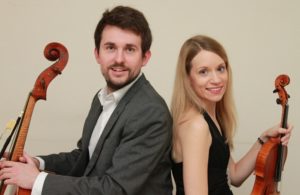 Fiona also runs Orchestra Vitae, a London-based orchestra of young professionals, whose aim is to alleviate loneliness across the London community. Orchestra Vitae performs regularly at St John’s Smith Square. Alongside her academic and performance work Fiona teaches violin, piano and music theory both privately and in schools.

Orchestra Vitae Concert Chums Chats – direct to you by video or phone as part of their initiative to relieve loneliness, or just to raise your spirits – you don’t have to be alone!

During the period of lockdown and especially when in self- isolation, Fiona hopes her orchestra can assist people to feel uplifted with music, she  intends to start a Concert Chums initiative and writes:

I have been thinking of some ways in which the musicians of the orchestra could help to alleviate the feelings of loneliness and isolation so many people are suffering from in these very strange times. Therefore, we are launching ‘Concert Chum Chats’. We are offering short (10 – 15 minute) video calls during which a musician or musicians from the Orchestra will have a chat with an isolated person, and play them a piece (this could be a request). The idea would be to create quality connections between those on their own and the musicians.

This is entirely Fiona’s work and not an AfL sponsored initiative, but if you would either like to know more about it, or follow Fiona’s  directions below to access her offer,  you can email her directly at the address here: fiona@orchestravitae.co.uk.

Fiona would need to know the following:

There is no charge for this, but if it’s popular Fiona will set up a page so that people can donate to the NHS.